There’s no question inbreeding in Holsteins is increasing — some say to levels approaching alarm, but help might be on the way from bulls born in the 19th century with little or no relationship to 99% of the current Holstein population.

A unique breeding project, done in conjunction with Penn State University, the National Animal Germplasm Program, TransOva Genetics and Select Sires, used semen from bulls from the 1950s that traced their lineage to bulls born in the 1880s. This semen was used to fertilize ova from modern, elite females to create seven bulls and eight heifers. Their genomics are now being evaluated. “Genomic evaluation of the bulls suggest that lineages from the beginning of the AI [artificial insemination] era could be reconstituted to breed average for total economic merit in one generation when mated to elite females due to high genetic merit for fertility, near-average genetic merit for fat and protein yield, and below-average genetic merit for udder and physical confirmation,” says Chad Dechow, a Penn State geneticist leading the team of researchers on the project. Bringing these genetics back into the Holstein breed is long-term prospect with no guarantee of success, he says. But the current project does demonstrate the possibility of using semen from the 1950s to reintroduce lost genetic variation.

Inbreeding levels in Holsteins is increasing reached an average of 8% in 2019. Eight percent is still considered a moderate level, but averages don’t tell the whole story.

According to AgSource, which has been collecting and estimating inbreeding since 2011, 76% of Holstein cows born in 2011 fell in the low to moderate category of 3.15 to 6.25% inbred. However, Holstein calves born in 2018 now fall in the moderate to high category (82%), which is 6.25 to 12.5%. The rate of inbreeding has roughly tripled since the introduction of genomics, going from 0.1% per year from 2003 to 2008 to 0.3% per year from 2013 to 2018. One of the reasons is the generation interval has been cut from five years to less than three with the use of genomic testing. The bigger problem is 99% of Holstein AI sires born in and after 2010 trace to just two bulls: Round Oak Rag Apple Elevation and Pawnee Farm Arlinda Chief. Using data tracing male lineage, researchers found one line of sires tracing back.

More than 100 years ago that was unrelated to Elevation or Chief. That sire was Netherland Prince, born in 1880. A sire born in 1888, Colantha’s 2D Sir Henry, is distantly related to Elevation, but split from that lineage early on. To get semen to start their project, researchers scoured a list of AI bulls descended from Netherland Prince and Colantha. Zimmerman Alstar Pilot, born in 1954, was the Netherland Prince descendant selected. Four sires were matched from Colantha, and W Caliban Cuthbert from University of Minnesota was selected to represent the Colantha Line. Cuthbert was born in 1989 as part of the University of Minnesota’s control line breeding project, but his sire was born in 1953. Through in vitro fertilization, 12 Colantha embryos and 15 Netherland Prince were obtained and implanted in recipients. Three males and three females were born to the Colantha lineage while four males and five females were born to the Netherland Prince line. The two highest genomic Predicted Transmitting Ability for $Net Merit Colantha lineage bulls were enrolled for semen collection at select Sires when they reached a year of age along with the three highest testing Netherland Prince lineage bulls. Semen from these bulls is now available for further research. Performance of daughters will be evaluated to demonstrate the potential of introgressing their genetic diversity back into the Holstein breed, Dechow says. In other words, what’s very old could become new again. 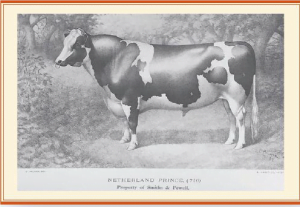