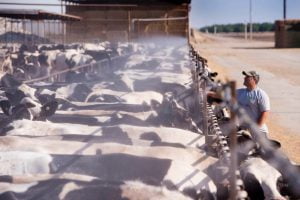 CRV has already been an active player with its own branch in the United States for 12 years. And while CRV might be just a minor player in the major league of the world’s largest breeding population, it is currently showing stronger growth than fellow AI organisations. The message of health and efficiency is apparently also gaining ground with American farmers.

With a population of approximately 9.4 million dairy cows, the United States is the world’s largest breeding market. The USA is where the bull Tops originated from, where the Etazon programme flourished and there was even a form of cooperation with AI organisation CRI. Despite this, it took until autumn 2009 for CRV to cross the pond and take its own breeding programme and sales network to the USA. This new adventure was embarked on with the hope and expectation of rapid growth, is how current Managing Director Brett Haines reflects on the move. But as an unknown name, getting a subsidiary off the ground and building a presence in North America was no easy task. ‘Back in the early days, American farmers were quite reserved. CRV was an unfamiliar name so there was some reluctance initially. It takes time to establish a reputation. Gaining their confidence in a “foreign” company took a while’, Haines indicates. For the first ten years after it was established, the US company booked losses. But, as Haines is noticing, the tide is slowly starting to turn. In the first full financial year, the company sold 30,000 doses of semen. Last year, this figure had risen to 400,000 doses, an ample 14-fold increase. And that is certainly to the satisfaction of Haines, whose main mandate is to increase the profitability of CRV’s American subsidiary.

Scale is a challenge

Haines has to hit his targets with a small team, comprising a total of 17 employees backed up by a number of representatives who work on a commission base. That limited number of employees immediately presents Haines with the biggest challenge: the scale of the company. ‘If I had to name the biggest challenge for CRV USA, then it’s our size. Competitors like ST and Genus employ hundreds of people, while an operation like Select maybe even has thousands. Simply in terms of sales opportunities, that gives them a huge advantage: they can visit vastly more clients than we can.’ So Haines is justifiably proud that CRV is currently showing stronger growth in the US than its competitors. The AI market in the US grew by 2 per cent in Q1, CRV noted an 8.6 per cent increase in sales from January to March. ‘American farmers love competition; they like to be able to choose from several competing suppliers of semen,’ Haines explains. ‘That is advantageous for us now that they know our name.’ But this is not the sole reason for the upsurge in sales. Haines also mentions the experience of his sales representatives. ‘We have a very experienced team. One sales representative for semen has been working for us for less than two years, but all the sales team have at least five years of experience selling genetic products.’ 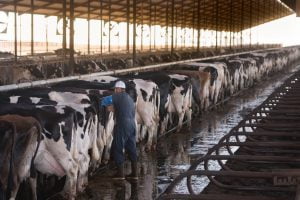 The message of breeding for health and efficiency is also gaining momentum. ‘The capacity to milk more cows is very restricted for American farmers because many dairy cooperatives work with quotas. The current focus of dairy farmers is far more on how to maximise profitability at a minimal cost. Our emphasis on health and efficiency is a very good match with that goal’, says Haines, who is also seeing a rising demand for bulls with good fat and protein ratios. The scores for CRV Health and CRV Efficiency are the leading traits in the CRV sire catalogue. ‘We list these index scores first for all bulls, from both the American and Dutch breeding programmes’, Haines explains. For the American bulls, the Cheese Merit also plays an important role, because components are heavily weighted in this rating. ‘In the first half of the catalogue, we present the American bulls with the US scores, followed by Dutch bulls with Dutch scores in the second part. For example, we also list the breeding value for udder health there. Some sales representatives sell a lot based on that value. And American farmers are tentatively starting to explore feed efficiency too.’

‘The current focus of dairy farmers is far more on how to maximise profitability at a minimal cost. Our emphasis on health and efficiency is a very good match with that goal’

The TPI formula only plays a small role in domestic marketing efforts. ‘The majority of American farmers are not interested in TPI’, indicates Haines. But there is a strong demand for bulls with a high TPI from abroad. And exports of straws of American semen are also on the up. In total, US AI organisations sell around 28 million doses in the domestic market, while around 40 million doses are exported. The volume of straws destined for markets outside the US has grown by more than 8 per cent each year over the last five years. ‘The United States is home to the largest breeding population and is also where the major players in AI are located’, is how Haines substantiates that rise. ‘Another contributing factor is that countries such as China and Russia and the Middle East region, which import a lot of semen, have large-scale dairy farms that are managed in the same way as large farms in North America.’ So TPI definitely plays a role in the American breeding programme, just like Cheese Merit, CRV Efficiency and CRV Health. Each year, CRV uses 20 bulls in the US. Half of this number is a product of the Peak programme, a collaboration between CRV and breeding organisations Urus, Evolution and Jetstream. ‘It would come as no surprise to me if the number of American bulls we use every year rises in the years ahead to satisfy international demand’, Haines predicts. The aim is also to use as many A2A2 bulls as possible in the American breeding programme. ‘The demand for this in our own country is also rising’, Haines notices. ‘The market for A2A2 milk is still small, but every farmer says that they will be the next one to start supplying A2A2 milk.’ The demand for polled bulls is also developing, although at a slower pace than in Europe. Most interest is shown by large-scale farms, Haines notes. These farms are the most sensitive to the attitudes of consumers and public opinion. They are the first in line to be concerned about public debates on animal welfare, which includes the practice of disbudding calves.’

Although the export market is still growing, the domestic market is dwindling. The size of the US insemination market decreased by 5 per cent over the last five years, with the dairy market in particular suffering from a 22% per cent decline in the last five years. Haines attributes this decline primarily to the growing demand for beef on dairy bulls. For example, in 2015, US AI organisations sold 2.7 million doses of beef semen. By 2020, this figure had expanded to 7.2 million doses. This includes sales to beef farmers, but sales in this segment are falling due to the higher costs facing beef farmers in recent years. At CRV USA, beef on dairy bulls, especially Angus, account for around 20 per cent of the total number of straws sold. Accounting for 80 per cent, the majority of sales of straws are claimed by dairy bulls – mainly Holsteins. In North America, CRV sells around 30,000 straws of Fleckvieh semen and 15,000 straws from the New Zealand breeding programme that focusses on cows that perform well in farming systems with access to grazing. Although the total insemination market is shrinking, Haines is seeing a revival in the use of sexed semen. In Q1 of 2021, American AI organisations sold 2.4 million doses of sexed semen. A year earlier this figure was 1.8 million. ‘That development favours competitors like Genus and ST but is to our disadvantage. We have a higher margin on the sales of conventional semen.’ However, sales of semen cannot be the sole contributor to boosting the company’s financial results. Haines has also committed to expanding the Ovalert systems for monitoring health and fertility. ‘We have set ourselves the target of gaining five new clients in each of the three main regions in the East, the Midwest and the West, with an average of around 500 cows on each farm.’ HerdOptimizer, CRV’s management package for registration and analysis of genomic breeding values, has recently been re-launched in the US, continues Haines. ‘We already offered this tool before, but were too early for market acceptance. Now that commercial farmers are testing their animals, we decided to re-launch it. This is an example of how we are finding ways for CRV USA to contribute to the results of CRV in general.’

Woods Hill Farm in Turin, New York, is home to 788 dairy (cows) with a 91-pound tank average, 4.2 percent butterfat, and 3.2 percent protein, milking three times a day. Using 100% CRV genetics for the past 11 years, the dairy has received the Superior Milk Award yearly from their creamery.